This post, 2018 JUNE – Karla’s Garden Day, was written by Glinda/Annie in Austin for the Divas of the Dirt blog.

A diminished group of Divas of the Dirt turned up for Karla’s 2018 garden day on a very hot Saturday in June. She hoped we could weed and clip a couple of beds in the back. Luckily for us, Karla’s neighborhood had 2.3” of rain a few days before we came – no weeding in rock-hard ground! Unluckily for other people in the neighborhood, that storm also produced straight line winds that brought down trees.

Only Karla and Mindy were there when I came. Buffy soon joined us but she would be in-and-out for part of the day; DivaAnnie was still in intensive care after surgery, Mattie was out-of-state and Sophia’s medical issues were ongoing.
Karla had used some time off work to good effect in her front garden…it was in such pristine condition that all we could do up there was admire it!

The patio bed had a lovely little Anacacho orchid that was still staked and it needed some adjustment. Weeding and composting were needed along with digging/cutting out tree seedlings and saplings. Most of us live in neighborhoods that are 20 to 40 years old, full of trees like oaks, hackberries (the worst!), cedar elms, pecans, Arizona ashes, mulberries, China berries, Chinese hollies, yaupons, ligustrums and more so tiny trees everywhere are an unavoidable result. 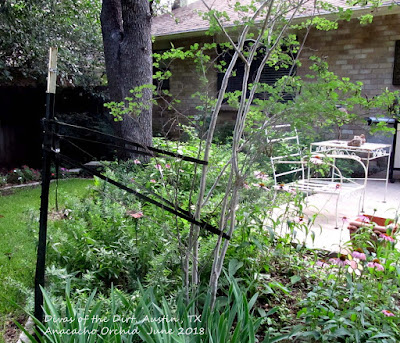 Here’s one part of the patio bed after weeding, before clipping, composting and mulching. It’s all foliage in the photo, but there would soon be tubular orange Mexican Honeysuckle blossoms and the light, true-blue blooms of Plumbago, followed in a few months by the lavender daisy-shaped flowers of Fall Aster. Actually, late May-early June is a good time to cut back Fall Aster – doing that can mean even more blooms in late summer. 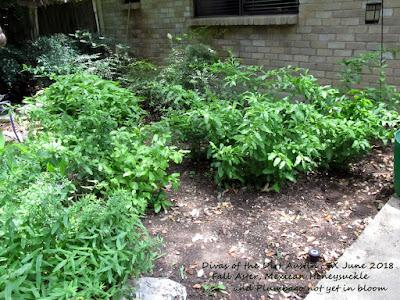 The Anacacho Orchid stood a little straighter, with Purple Coneflowers at its feet. 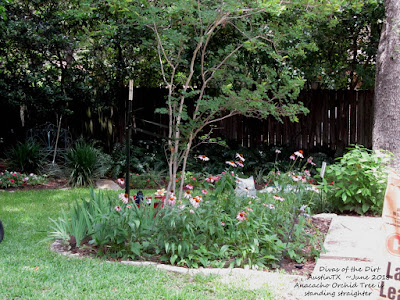 Karla’s long fence border had a lot of color, but she had chosen a restrained number of plant species. 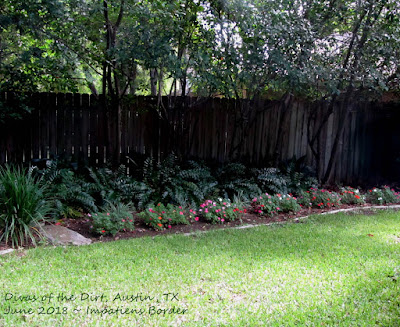 The combination of  holly ferns, giant liriope and multi-colored Impatiens in this shadier spot gave it a feeling of peacefulness and order… 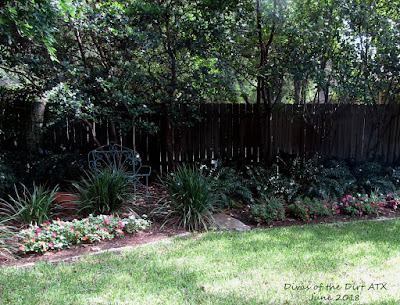 …while the exuberant Echinacea purpurea/ Coneflowers added some excitement nearer the patio where more sun shines. I’ll bet there were butterflies later on, too. 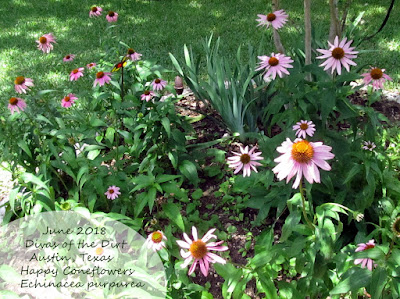 One interesting effect of working in a small group in just one area was that we had long, uninterrupted conversations… we were all worried about Divas Annie and Sophia, shocked at the news that Anthony Bourdain had killed himself in France and fascinated with Mindy’s tale of being on jury duty. Talking as we worked made the steamy day seem shorter. 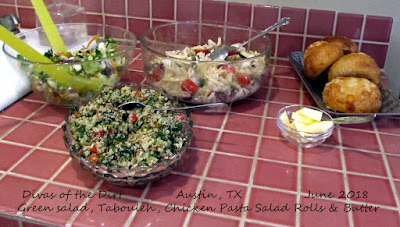 And her dessert of individual strawberry-rhubarb pies (with ice cream) was as pretty to look at as it was delicious to eat. 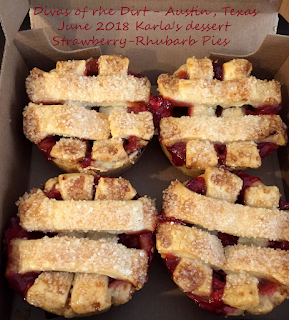 I left a little early but Karla, Mindy and Buffy kept going – the high for the day was 96.1°F – whew.

Karla sent a gracious email the next day,
“We were small in number, but we were mighty! … I can’t wait to sit out there when it cools a bit this evening and enjoy the beauty.”

This post, 2018 JUNE – Karla’s Garden Day, was written by Glinda/Annie in Austin for the Divas of the Dirt blog.
Posted by Annie in Austin at Monday, June 10, 2019 No comments: Links to this post