Sugar was not ready for a work-in-the-yard kind of garden meeting, but she sure did want to see her friends. She decided that a brunch kind of meeting was the way to go and after a lot of back and forth emails, the day, time and place were chosen – an Austin, Texas classic place to meet – Magnolia Café on Lake Austin Boulevard. Diva Annie thought it was an appropriate place – she remembered that Magnolia was the restaurant where a newly formed garden group had their first meeting breakfast years ago – before they came up with the name Divas of the Dirt.

The Divas of the Dirt were not all able to make it, but the Divas who showed up had a great time! 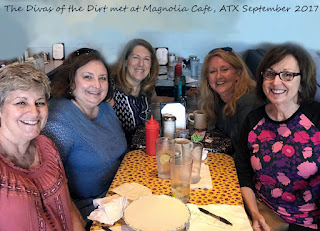 This post, 2017 – May and June, Sophia and Glinda, was written by Annie in Austin for the Divas of the Dirt blog.

2017 was fixing to be a very unpredictable year.

SOPHIA
May was another rain-out. Sophia thought 80% chances were so high that she cancelled her planned day. We were not happy – partly because we really wanted to help Sophia with her garden and partly because she serves such wonderful lunches and desserts!
The rain did materialize and boy, did we need it.

At least there was a new rescue kitten at Sophia’s house to console her for the lost meeting. 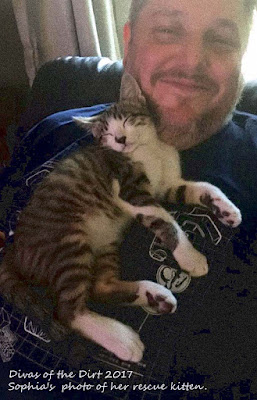 Mindy scored some rescue plants that had been torn out for new landscaping. This beauty is a RickRack orchid. 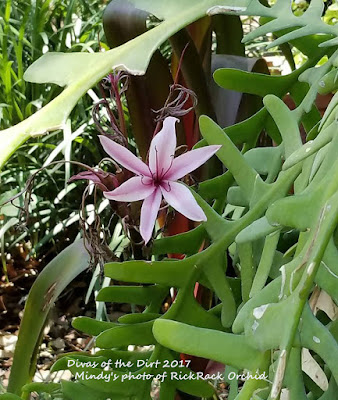 GLINDA
Back in January the Divas set mid-June as the date for Glinda’s day. Luckily for Glinda the weather was warm but dry. The back garden inside the fence looked pretty good. 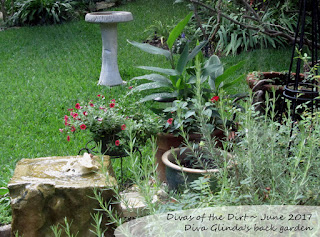 The beds were tended and it was full of birds and flowers... 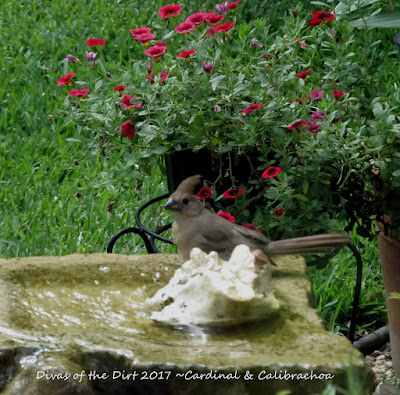 ..but the front yard really needed help. There aren’t any Before photos of the project because Glinda didn’t like working up there. The trees were okay and the lawn was mown but the beds were a mess! The mutabilis rose had frozen back hard but Glinda wanted to clean it up and give it a chance. The hummingbird acanthus and salvia in the parkway were good for the birds but the weeds made it an eyesore for humans. The woodland area had flowers but you could hardly see them.

DivaAnnie arrived first, then Sophia, Karla and Mattie (with tail-wagging Barbie) and Buffy a little later. The Divas of the Dirt set to work and made everything better – the lawn bags were filling up! 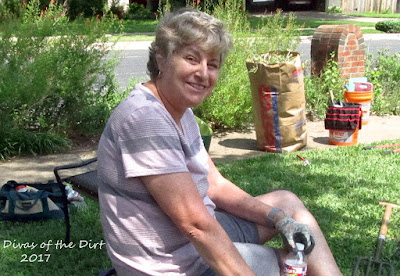 Buffy set to work with the hedge clippers, taming the boxwoods. 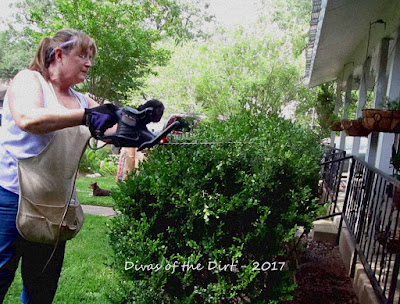 The aging Arizona Ash provided dappled shade for the workers. No one knew this would be the tree’s last summer. A couple of months later Hurricane Harvey cracked off many limbs, revealing rot. The tree had became too dangerous to keep. 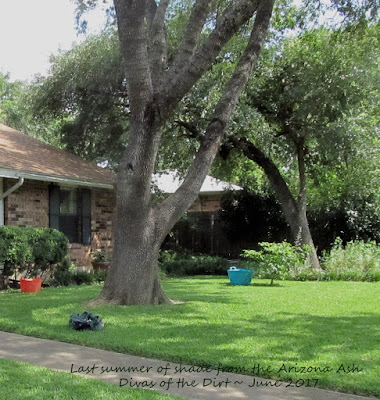 The front bed looked a lot better – what was left of the rose would have to decide whether to live or die. Mulching would come later. 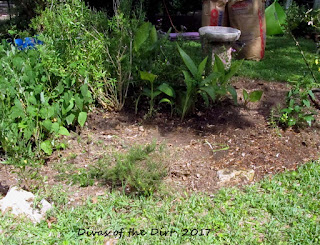 The woodland area was pretty once more, with dead sticks and sapling trees gone and Malvaviscus/Wax mallow blooming for the hummingbirds. 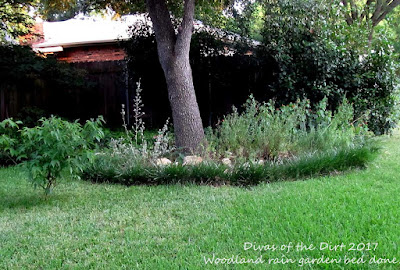 Time for lunch! Glinda used her meeting as a chance to try out La Fleur flower shop where she found gorgeous Hydrangeas. But Glinda’s menu had nothing fancy – it was an indoor picnic. Chips and Guacamole, Cranberry Chicken salad, cheeses and Black Forest ham on crossants and Gluten-free bread, Sweet Kale salad with lemon poppyseed dressing, tomatoes, Hibiscus-Mint tea and coffee.
For dessert there were raspberry/chocolate cookies and blueberry shortcake on gluten-free sponge cake with whipped cream. The mulched front border looked good and so did the parkway. 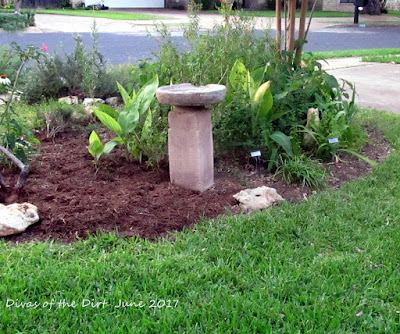 the Boxwood hedge looked not only good – it looked respectable. 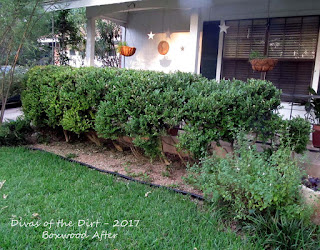 Just one pair of left-behind garden shoes gave a clue who had worked the magic. 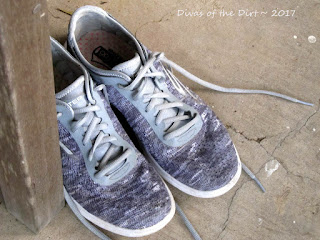 The next day Karla sent a photo of her butterfly border – Happy Summer! 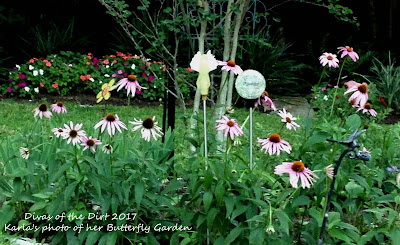 This post, 2017- March and April, Karla and Mindy was written by Annie in Austin for the Divas of the Dirt blog.

MARCH
Rain spoiled Karla’s plans for an early March meeting – she changed the date to later in the month. On the original day Glinda snapped a photo of her drenched Rosa mutabilis. 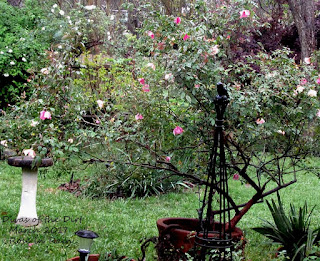 In early March the bluebonnets began blooming at Mindy’s house 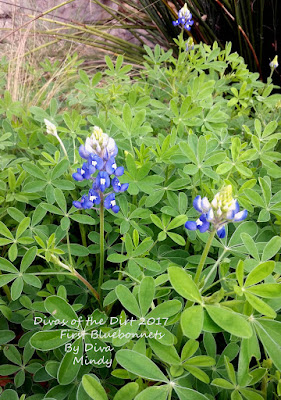 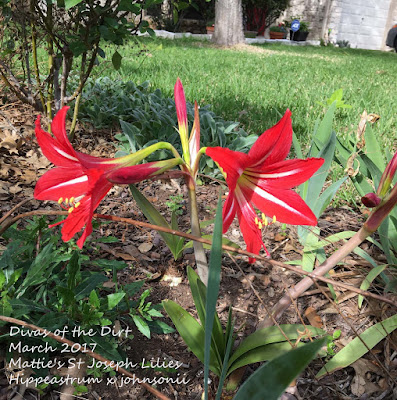 In mid-March the fragrant peach iris had started to bloom at Mindy’s. 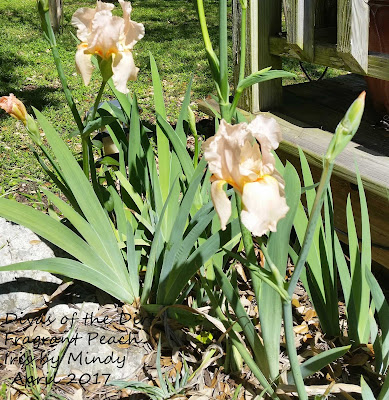 A week later the peach iris was blooming at Glinda’s house. 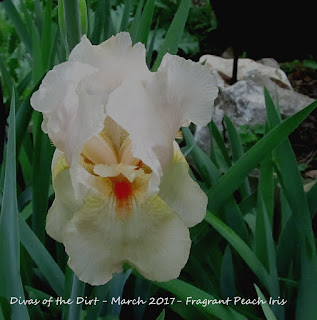 The following weekend Karla had better luck with the weather. She needed spring cleaning help and also promised a “murder mystery” 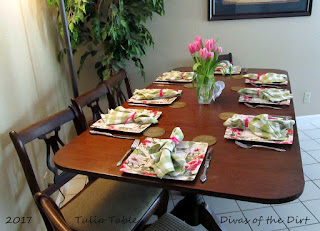 Her native Bauhinia lunarioides/Anacacho Orchid tree – memorial to a loved one - was in bloom. 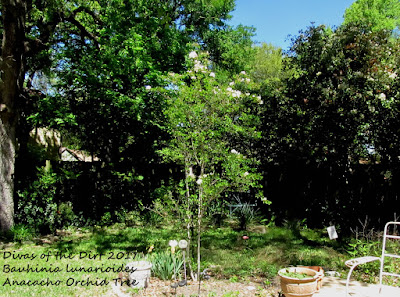 Karla’s clump of the passalong fragrant peach iris were now in bloom, along with Blue-eyed grass. 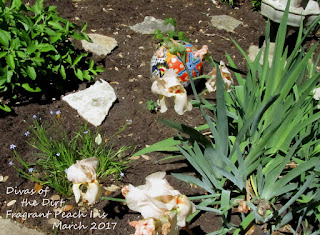 The Divas got beds weeded, plants reset and mulched.

And the murder mystery?  Crepe Murder! Well, not exactly murder but maybe ABH, Assault to Boughs with Harm? When a tree goes bad there is often no easy answer… digging an old crepe myrtle up and planting a “right-sized” new one may be prohibitively expensive while a severe chop might give the tree another chance. 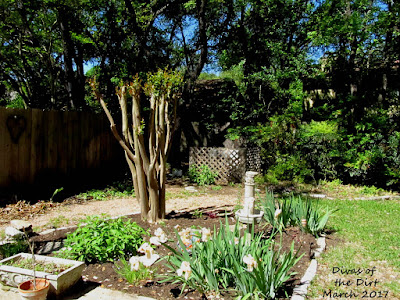 APRIL
For her meeting in April, Mindy had dry weather but a very small crew… an avalanche of external events kept Mattie, Glinda, Sugar and Sophia from coming. On the other hand, Mindy, Karla, Annie and Buffy got a lot done and had fun doing it. They weeded and planted and got the beds in order and declared the lunch delicious.

After the Divas left, Mindy and Warren worked to clear unwanted cedar that was smothering wanted trees like this Eve’s Necklace. 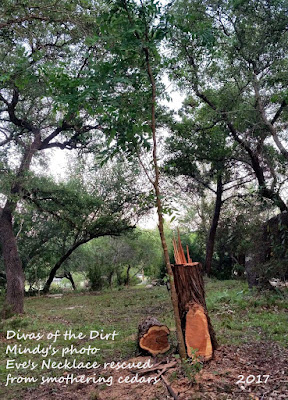 That pile of prunings is quite impressive! 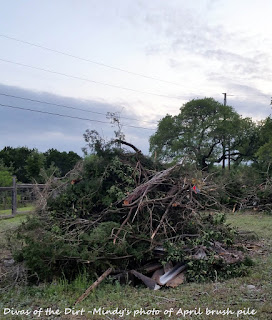 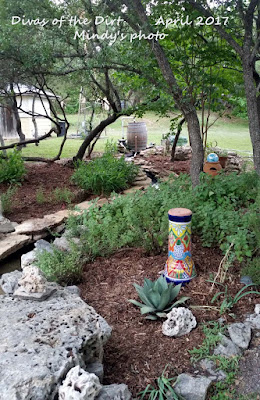 This post 2017 February Annie’s Day was written by AnnieinAustin/Diva Glinda for the Divas of the Dirt Blog.

For nearly 20 years the Divas took turns serving breakfast, then going out to work on their gardens together, and then going in for lunch sometime in the late afternoon. We loved doing it, but things change. Did the hostess really need to make two sit-down meals?

The Divas decided to skip the big breakfasts, eat something at home and gather with what my mom called “Coffee And…” , a cup of java and something simple - maybe a slice of coffee cake or a muffin. Then we’d go out and work on the project and in the afternoon the hostess would serve lunch. We’d try out the new plan at Diva Annie’s garden day in late February.

February in Central Texas is always a gamble. In some years it’s so cold and wet that the meeting has to be cancelled or rescheduled. In other years we’re working outside on one of the most perfect spring days you could imagine. In 2017, Annie threw the dice and won: Sunny and 80F.

Annie had already emailed everyone that she needed help with general cleanup: Pruning, raking of leaves, weeding, snipping back.
Usually Annie did her fall-winter clean up in stages. But she’d been unable to rake this time and there had been enough cold weather in January to kill back many of Annie’s plants. This year’s cleanup would need a lot of hands and a lot of paper yard bags!

Sugar was out of town with her family, Buffy would be in-and-out and Glinda could come for a while but would be late, so Annie, Karla, Mattie, Mindy and Sophia got to work. Buffy came, Buffy left. Glinda came, Glinda left, Buffy returned,

They clipped, they pruned, they cut back, but mostly they raked. And raked. Annie’s neighbor has an enormous Arizona Ash with a canopy that spreads over one half of Annie’s front yard. Annie has a big Chinese pistache that spreads over the middle. All those leaves and the cut back plants added up to a lot of yard bags. It was rumored that there were 37 yard bags when the Divas of the Dirt were done.

February is grillin’ weather in Austin –  at lunchtime the Divas were pleased to see skewers laden with chicken, shrimp, tomatoes, zucchini, pepper and mushrooms, cooked on the grill, served with sides of cauliflower rice and cabbage salad. Everything was delicious and also healthy!

This post 2017 February Annie’s Day was written by AnnieinAustin/Diva Glinda for the Divas of the Dirt Blog.
Posted by Annie in Austin at Friday, April 06, 2018 No comments: Links to this post