This post 2013-January Holiday, was written by Annie in Austin/Diva Glinda for the Divas of the Dirt Blog

December was not kind to the Divas of the Dirt, and we just could not be together in December for our annual Holidiva Day. By the time we could gather at Karla's house, the Christmas trees were long gone, and hostess Karla turned to New Year's decor instead. Schedules are always a problem! We'd have to party without Sophia, who had a class that couldn't be missed... Sugar would be a little late but she'd be there.

But as we emailed & planned the menu, a surprise was in store for Karla. Two days before the meeting, the tall hackberry tree in front of her house suddenly fell over - no warning, no apparent problems or reason - just Whomp! The tree did some damage on the way down but the main weight landed on a small fence, not the housewall or roof.


The professionals came to take away the fallen tree while Karla got ready for Saturday and her friends talked about what she could do with that the empty space - it should be sunnier without the looming hackberry!

As we arrived on Saturday, we all had to check out the scene 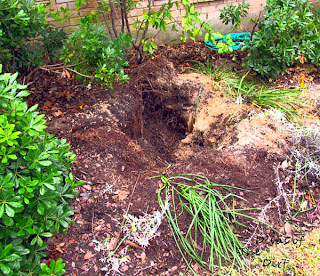 DivaAnnie was talked into demonstrating the depth of the hole... well, after all, she was wearing boots! 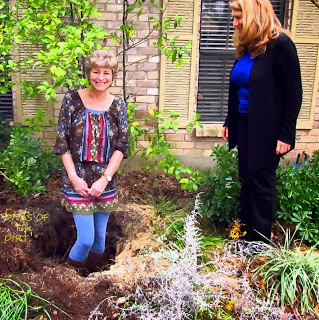 The table announced that this was a holiday, but no elves or Santas allowed ... this was an elegant holiday! 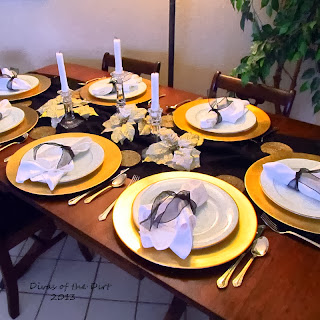 We began with a cold appetizer, Crab spread on a bed of baby greens, ready for thin sesame crackers and jicama slices. 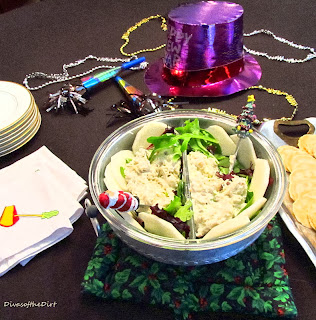 Mindy decided that instead of the usual poinsettia cocktails, she'd bring prosecco and add a little sparking pomegranate - excellent idea for a toast! 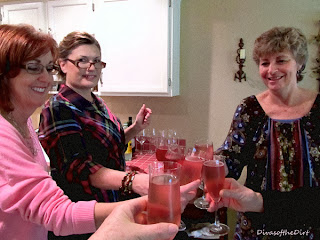 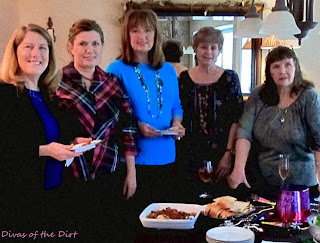 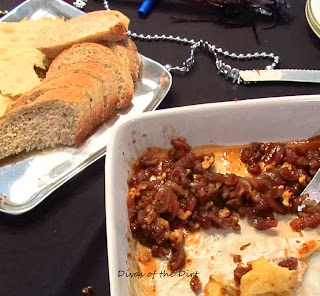 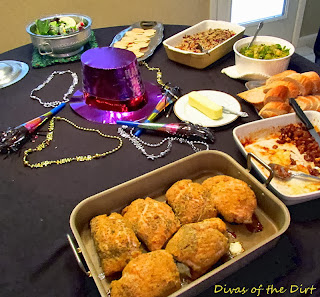 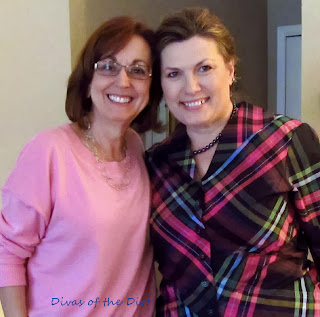 We brought grab bag gifts for the stealing game. 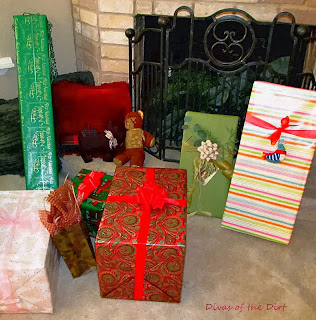 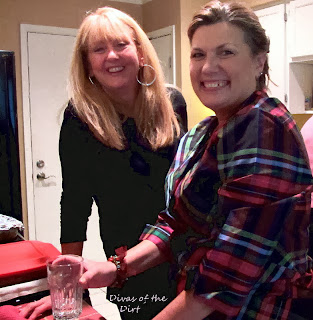 Buffy looks festive in turquoise. We're ready to start the stealing game, and since there was no January meeting at a restaurant, maybe we should chose dates for 2013 and let them be stealable, too? 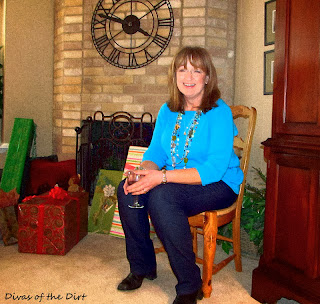 Mattie and Karla like the gift that Annie has opened, hand made framed wall art brought by Mindy, but will Annie get to keep it? Spoiler: Mattie did steal it!) 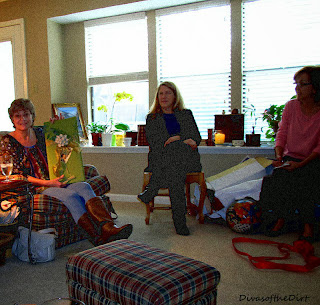 Sugar ended up with a garden cart brought by Annie.

Glinda's prize was a black wine tote with glasses and a wine-chiller icicle, from Sugar.

Hostess Karla managed to hang onto a gorgeous piece of Talavera-style pottery - a pierced globe that would look cool when lit from within. Where did Buffy find it? Surprisingly, at the local chain of grocery stores... you never know where treasures will turn up .


Two desserts appeared, but who could choose just one? Buffy's Bananas Foster was wonderful, and so was Sugar's Tres Leches Cake.


Sugar said you didn't need a recipe to make this delicious dessert, just use a white cake mix and bake it in a 9X13 pan, mix heavy cream, evaporated milk & sweetened condensed milk together, then pour it over to soak in. The topping was an old favorite using 2 egg whites, sugar & white corn syrup beaten in a double boiler.

We enjoyed the desserts and the company, while the conversations wandered everywhere - what fun talking about recent movies like Lincoln, Django Unchained & Les Miserables!.


Mattie's project needed cool weather, and her garden would be the first up in February. We all agreed that Karla's turn should come next in March - it would be our pleasure to help her decide what to do with that crater in the front yard!

What will the new year bring for the Divas of the Dirt?
Posted by Annie in Austin at Tuesday, October 08, 2013 No comments: