February is always an iffy garden month in Austin - sometimes pleasant, sometimes cold and rainy. But in more northern states little real gardening can ever be done in February. Here, at least, "iffy" does not mean impossible!

The inside of Mindy's house was warm and welcoming and unlike the freeze-blackened landscape outside, here were bright flower faces - primroses to take home. 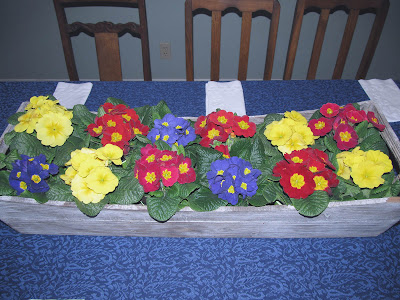 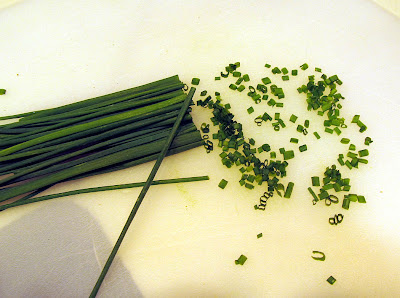 Mindy claims she'd made Mock Eggs Benedict a few years ago but it tasted new to us: the eggs were gently scrambled, spinach added, scooped onto sandwich rounds and her favorite Hollandaise Sauce poured on. With a huge fruit bowl and country potatoes, this was a substantial breakfast! 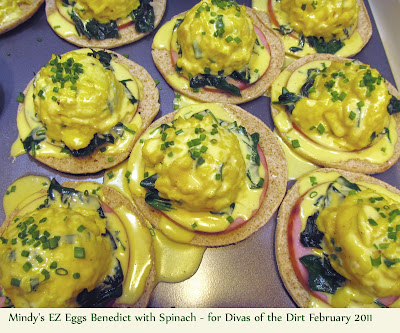 There was no real rain falling - just mist & drizzle - so we went out to see what we could do to get Mindy's yard ready for spring. We know this garden well - what a shock to see what repeated dips to 15°F had done to old favorites like the Barbados Cherry trees and Fragrant Mistflowers 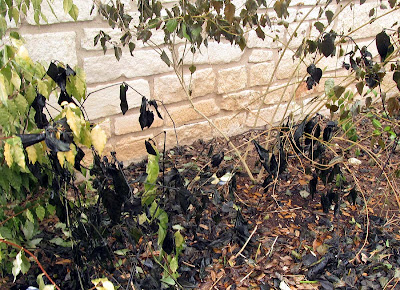 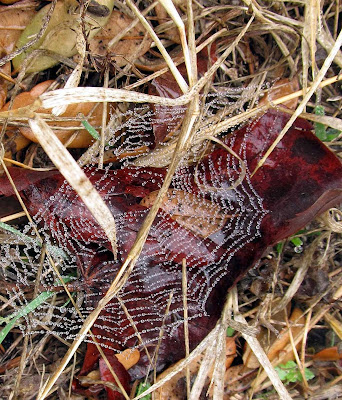 The sprouts from the live oaks were not discouraged by winter - removing them from this bed, weeding and mulching took a long time 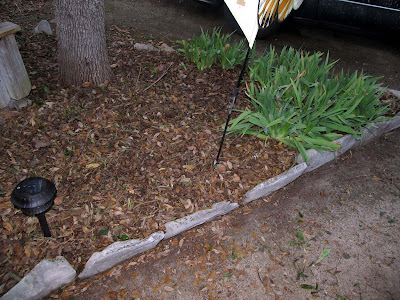 The dead trunks of Barbados Cherries were cut low, but these shorter stems may resprout. We cleaned up around them and added compost and mulch. 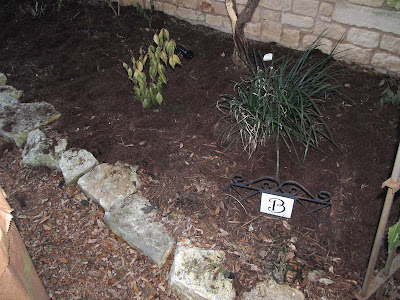 The gate beds needed help - assessing the damage from winter, weeding, cutting back & mulching were the tasks needed here. Deer-resistant evergreens like rosemary and artemesia did not have a happy winter 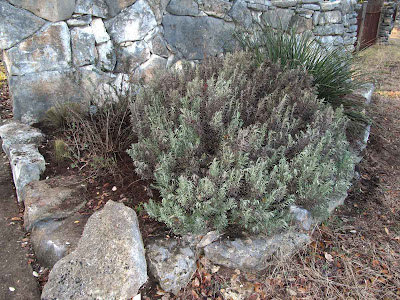 The opposite gate bed is now ready for March 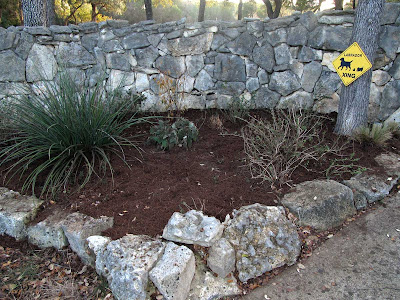 We continued to work on the back yard and pond edges but soon the scents of cooking and baking pulled us back inside. We noticed the tidied front door area as we went in for the delicious meal Mindy & Warren had made - 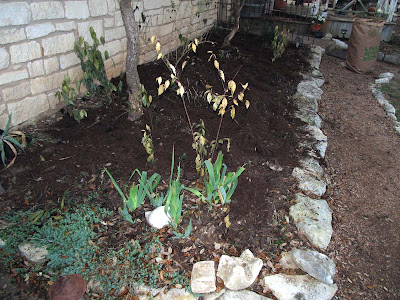 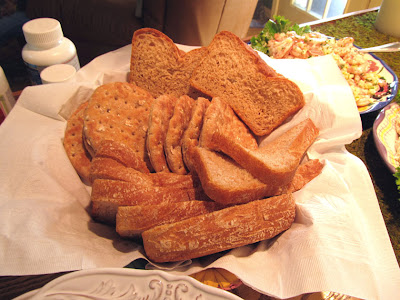 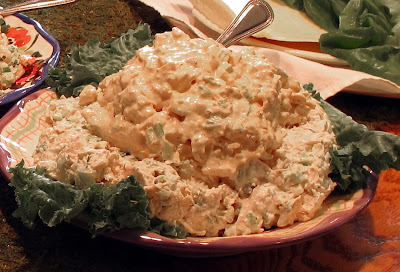 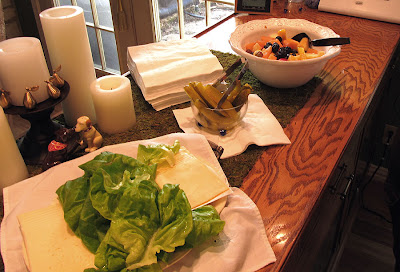 And a finale of Red Velvet Birthday with whipped cream... 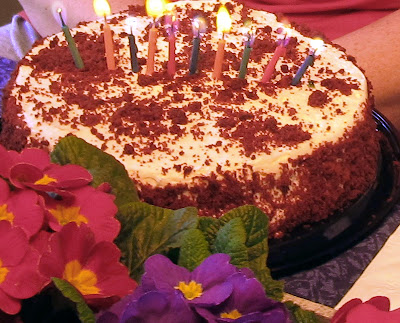 We got part of Mindy's new project done, too - her dream was a Paisley-shaped border around a big-ole Cedar tree (that's a juniper to you Yankees). The shape traditionally resembles a teardrop or maybe a mango 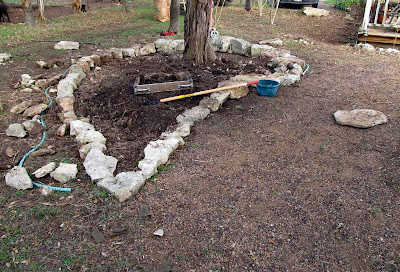 As usual, the shape was laid out with the hose. Whenever Mindy & Warren dig a hole, some rocks have to come out - these rocks are homegrown! They were scrounged from various piles, rolled and moved over, set in place and compost and soil were added. 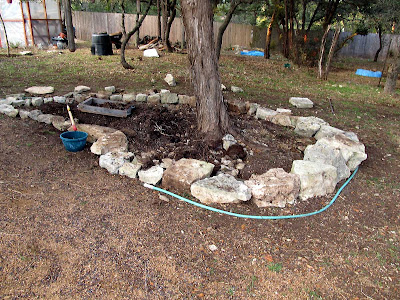 We did the preliminary work, leaving the planting design and acquisition for Mindy to do - maybe she'll take a photo this summer so we can find out how this new bed worked.

Maybe the weather in March will be more like spring!
Posted by DivaGlinda at Tuesday, May 31, 2011 No comments:

Buffy had a craving for applewood bacon, so she suggested Manny's Uptown Kitchen for our annual planning meeting - we were glad she did. The Divas of the Dirt arrived at the Gateway Shopping Center in drizzle and mist on a gray Saturday morning. 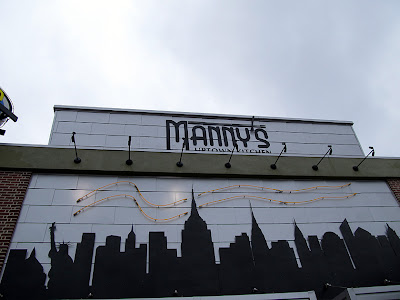 In just a few minutes the people in charge had our group set up in the cozy & comfortable main room. Other commitments meant a few Divas of the Dirt had to leave early and/or come late. Diva-Sugar was out-of-state, so she couldn't be there at all. We set up the schedule for the year as best we could: Mattie was returning for sure but Sugar's return was still a question mark. And since we garden in Austin, the weather, as always, would be a bigger question mark. 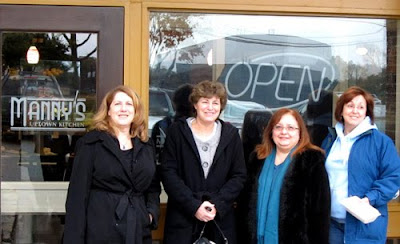 There was no question about how we liked Manny's - the food was wonderful and the service impeccable. Pancakes! Omelets! Blintzes! Yum! Five of us lingered for conversation and decided we want to come back to Manny's another time.
Posted by DivaGlinda at Friday, May 13, 2011 No comments: 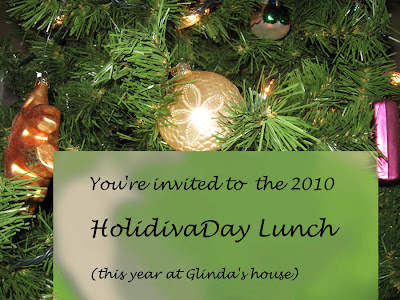 We always get together in mid-December - and not for a project/work day - just for fun. The Divas of the Dirt take turns being hostess - in 2010 I was the lucky one.
The tree was up: 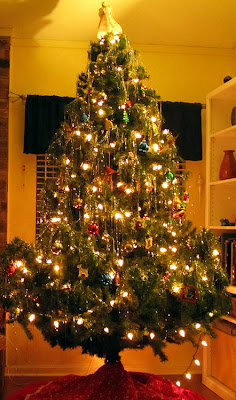 The table was set. I was in a nostalgic mood and decided to use the tartan cloths from decades-ago Christmas dinners in Illinois: 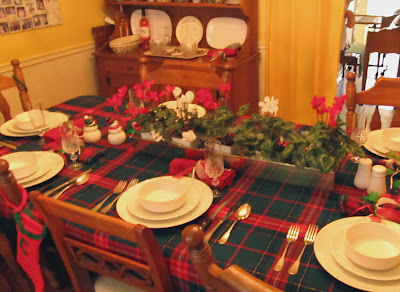 Diva-Sugar was out of town and Diva-Mattie was not well but we other 6 Divas were in holiday mood. December can bring beautiful days in the seventies, just right for a stroll around the garden. The weather had been so mild that Salvias, shrimp plants, gaura, pansies, Lion's Tail and tropical milkweed were untouched by frost. We saw rosebuds and caught the camellia in bloom, wondering how long it would be before real winter arrived. (This photo was taken a few days before our party.) 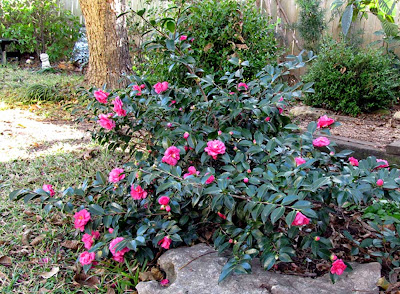 My camera had broken a few weeks previously and we weren't used to the new one so while our group was very together the group photo was quite unfocused! 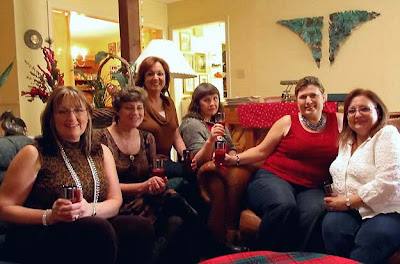 Diva-Mindy brought champagne and the ingredients for Poinsettias - and in keeping with the nostalgia theme we drank them from vintage silver ombre glasses - very Mad Men Sixties, aren't they? 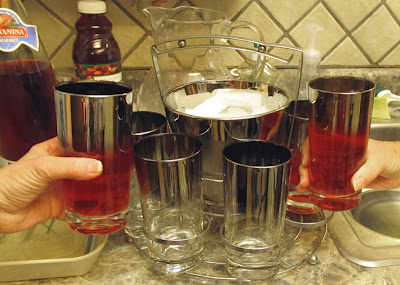 I put the salad in a vintage bowl too, but for the main dish I tried something new - Chicken Marsala with double the mushrooms and double the wine called for in the recipe: 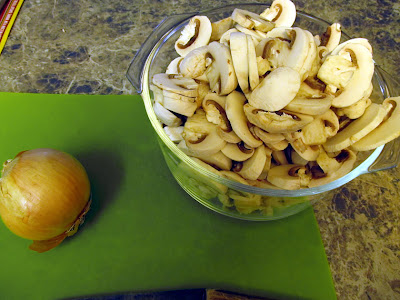 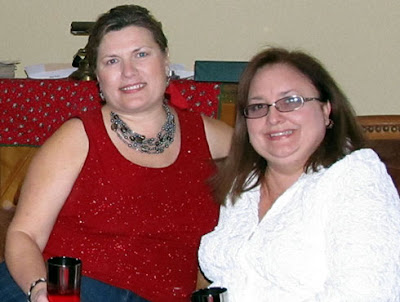 Sophia had hinted at a special soup - we hoped it was her famous Italian Wedding Soup and were glad to be right! 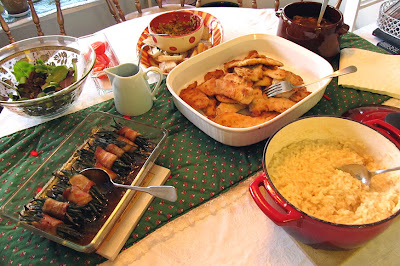 Karla brought a fantastic California wine along with delicious bacon bundles. Buffy arrived last, bearing the ingredients for risotto (and her cool ceramic-covered Dutch oven) prepared to cook up a treat. Mattie stopped by for a quick visit- she wasn't strong enough or well enough to join us for dinner, but she stayed long enough to sip a cup of Sophia's special soup. 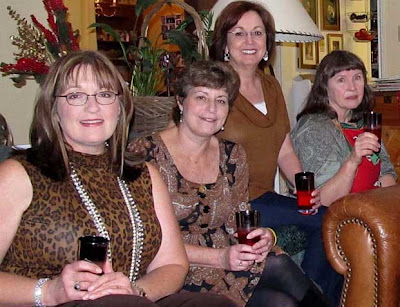 Diva-Annie wrapped up the menu with a dish we never tire of -Amaretto Bread pudding - enjoyed while we played our grab bag game. Everybody plays... and everybody wins that game!
Posted by DivaGlinda at Wednesday, May 11, 2011 No comments: Links to this post